To get it out of the way, “…And Don’t The Kids Just Loathe It” is
the new name of my regularly irregular reviews here on Kingfisher
Bluez.  I wasn’t going to give it a name, because I don’t name
something that I don’t want to get close to, but seeing how making
doodles, snapping photographs and droning on and on about how amazing
musicians are comes rather naturally to me, I guess I should probably
make them all into a focused commitment.

Onto the review: Jeffrey Lewis, for those that don’t know, is one of
the players of the anti-folk genre, acting as a kind of folk/punk
historian with humour, great songs and a Jonathan Richman-like
earnestness.  He also writes comics (as if he weren’t awesome enough
already).

Tim and I saw on the posters that the doors opened at 8pm and the show
started at 9pm at the Rickshaw Theatre down in the always lovely and
laid back neighbourhood of Main and Hastings.  In case you’re not a
Vancouverite, Main and Hastings is a fantastic area to go to.  With
the lovely stench of urine following your every step and heroin
addicts and crackheads in their usual rampant whimsy, it’s hard to
pass up going to this cross-section of human misery.  Ahh.  Dig that
city livin’.

Anyways, we got there at around 8:30, and sure enough, not even the
doors were opened.  We asked a guy at the door when Jeffrey would be
on, and he said probably not until TEN MINUTES AFTER 11.  Now
normally, we’d love to stay in Main and Hastings for the next couple
of hours, but we felt like a change from the junkies asking us for
money repeatedly, so we got something to eat instead.

We got back at 11pm and one of the opening acts (Ora Cogan, who Tim accurately described as, “someone who listens to PJ Harvey a lot) was still
playing.  We went up to the merch table which Jeffrey’s bass playing
brother Jack was running and got Jeffrey Lewis’ fabulous comic “Fuff”,
issue #1. I also managed to snag a copy of Jack Lewis’ 7 inch, “Hero
Worship And The Animals That We Love” which has already been subjected
to repeated plays.

After a little bit, Jeffrey Lewis started playing, and the audience
got up from their seats to the front.  There was, and I’m
not exaggerating, only twenty people.  Twenty!  I knew the show wasn’t
really advertised, but I thought more people would be coming,
especially since the theatre has the capacity for, according to their
site, 1,000 people.  Such a huge theatre made the small crowd stand
out more.  Jeffrey himself compared the venue to a “post-apocalyptic
landscape”.

The show, however, could’ve easily attracted 300 if people knew what
they were missing.  Jeffrey, with his trademark weak, raspy voice
serenaded us with songs which included gentle acoustic numbers and
energetic pop-punk anthems (have you ever seen someone make his
acoustic guitar feedback?  It’s a great sight, let me tell you).  He also preformed a folk cover of “End Result” by UK punk anarchists Crass, did a rap about mosquitoes and played his “movies”, which were series of drawings that he made with narration and musical accompaniment, including “A Detective Story” and a fantastic horror film called, “Creeping Brain” (the theme of which has been stuck in my head ever since).

The twenty people that were there were made up a nice little crowd.  A
little mosh pit of seven guys started up during the last song, and
Jeffrey went down into the audience to perform three more songs for us
(including a preview of his new “documentary”, “The Mayflower”).  It
was 1:05am when it ended, on a Monday night no less, but nobody made
any bones about that.

It was an amazing show.  I made the comparison to Jonathan Richman
earlier, and seeing Jeffrey gave me the same feeling as when I saw
Jonathan.  His endearing stature and charming quirkiness made me feel
quite warm and fuzzy and his school boy crush for punk rock is
infectious.  This may be a stupid analogy, but it was a concert that
felt like a delicious meal after a long day.  There was just a variety
of flavours, all complimenting each other and even the spicier stuff
settled nicely, giving that warm, satisfying feeling just before
taking a nice nap by the firepla–OH, GOD, CAN’T IT JUST BE
THANKSGIVING ALREADY?

-Julian “Hungrier Than He Realizes” Bowers 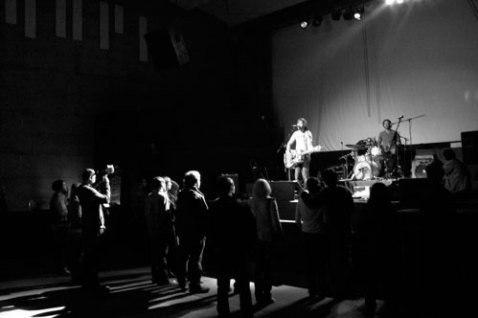 This is how many people there were!