And Don’t The Kids Just Loathe It… Coachella 2010 Review!

And Don’t The Kids Just Loathe It – Coachella 2010

Apologies about no drawings, but in order to capture the essence of
this trip, I’d have to make a painting on a scale of Guernica, and I’m
much too lazy to make that masterpiece right now.

So, Coachella.  Well, I suppose I’m submitting this review a little
late, but I had to be hospitalized after I suffered a coma in San
Francisco.  Well, no, not really, but I’m still damn tired, and I
didn’t even have any alcohol or anything to give me hangovers!   I’m a
very weak man.

Anyways, just a brief note on getting down there, Heather, Dave, Alex
and Tim took the bus down to Seattle to pick up their car that they
rented.  I took the bus down to Portland later in the day, due to the
fact I had to pick up my passport for renewal.  I met the gang late
that night in the grand state of Oregon, and what I thought was going
to be a little sedan we were riding in turned out to be a large SUV!
Woo!  But even then, it was a tight fit.  I don’t see how we could’ve
had a sedan.  Pip had to take the bus all by himself all the way down
to Indio so we didn’t see him for at least a couple of days.  Very
sad. 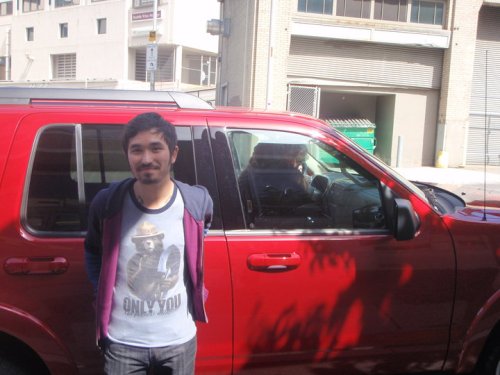 Anyways, on the way down, we stopped by Carl’s Jr., Taco Bell,
Wal-Mart and all the other amazing, unique sites the land of the free
had to offer, with Tim driving while running on energy drinks and no
sleep.   We even saw Supernanny’s car when we were driving into L.A.!
Yes, that is what we consider a highlight.  But dammit, it was a good
one. 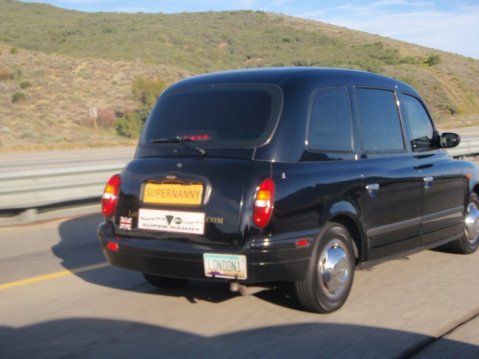 Finally getting to Indio, it was a gong show entering the camp site.
Even though it was a music fest, I couldn’t help but think how many
people weren’t there for the music but just to party mindlessly.  Ah
well.

Anyways, we didn’t find Pip until the next day and I was the first to
find him!  But blah, blah, blah, here’s the reviews of the bands that
I wrote down in a little notebook during the festival.  My ten
favorite sets will be marked with an *.  Tim’s with a #.

P.O.S. – Only caught the last minute (literally).  Blisteringly fast
hip-hop with an audience screaming, “Ta-da!” after.

Baroness – Went to sit in shade, was presented with prog metal.  Meh.

As Tall As Lions – Good energy, but I’m just surprised there’s no sign
of Wale at this point.

Yeasayer – Only caught the first part and was so far back, I couldn’t
see a thing.  But I could tell it was great.

Crowd basking in the sun.

The Cribs – Cancelled due to the volcano in Iceland.  Thanks for
telling us ten minutes after it was supposed to start.

Wale- After arriving onstage a good half hour late, Wale played part of a couple of singles before attempting to sing the chorus to Use Somebody by Kings Of Leon, followed by hitting on female audience members and then an early exit, leaving his set around the 10 minute mark.

Dillinger Escape Plan – I didn’t know it was possible to count off
crazy time signatures and jump around like a madman all at once.

The Specials – Only seeing a bit, you can tell the old boys still had it. 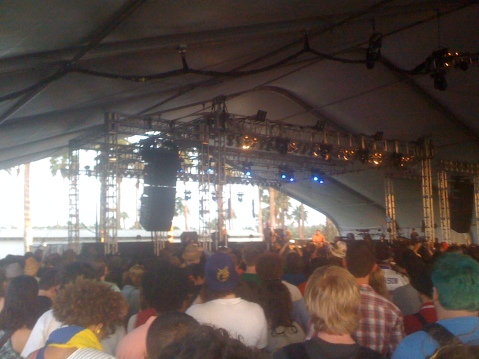 Them Crooked Vultures – Okay, admittedly, it’s not my bag, but how can
you pass up an opportunity to see Dave Grohl and John Paul Jones in
the flesh?

Echo And The Bunnymen – Tight, classic post-punk by one of the greats.

LCD Soundsystem *# – I want to be James Murphy’s best friend.

Camera Obscura – Really great, but admittedly, a little hard to
concentrate on while preventing heat stroke.

GIRLS – I wish I could’ve seen more than one and a half songs (which
were swell), but the heat made me retreat indoors.

Edward Sharpe And The Magnetic Zeros – I don’t think Alex Ebert can
stop moving for the life of him.  Not that that’s a bad thing.

Tokyo Police Club – Someone in the audience was waving a Canadian
flag.  Then it was taken down after a few minutes and was replaced
with a dude in an Uncle Sam hat.  But the band played on despite this
cutting down of pride.

The xx – Wow, I’m so far, I can barely make out the TV screens.  Did I
even technically see this band?

Dirty Projectors – To me, once again, this proves their live stuff is
better than their recordings.

Faith No More – My legs needed much of a break, so all I can see is
Mike Patton in a red suit with Hot Chip drowning out the sound.  Wait,
what’s that?  Are they playing Michael Jackson’s Ben?!

Due to exhaustion, I went to the camp site to rest, therefore missing
Muse, Flying Lotus#, Les Claypool, Die Antwoord#, Major Lazer, MGMT,
Dead Weather and saddest of all, DEVO.

Local Natives – Missing King Khan & The Shrines by a minute, I caught
Local Natives…who were on their last song.

Owen Pallet – I may just be a sucker for looped violins, but this was
a really great set.

B.O.B. – Pretty good hip-hop show.  Then he busted out “Warhawk”, his
decorated acoustic guitar.  Then I didn’t know what was going on.

De La Soul – We weren’t going to move from the shade, so the best we
got was people in front of the TV screens.  I think I’m less involved
than I was at The xx.  Still, awesome looking set from here.

Sunny Day Real Estate# – Awesome set by the great proto-emo band.  Plus
a cloud came to block the sun!  Thank you, non-existent god.

Yo La Tengo * – I’ve been waiting to see these guys for so long, and
it was certainly nothing short of what I wanted to see.  They danced
as well, apparently at the request at Sly Stone!

Charlotte Gainsbourg * – Even if by default she’s amazing because
she’s Serge and Jane Birch’s daughter, her performance certainly
stands up on its own.  She even covered her father’s Melody Nelson!
Though I was hoping for Lemon Incest.  Regardless, an amazing set. 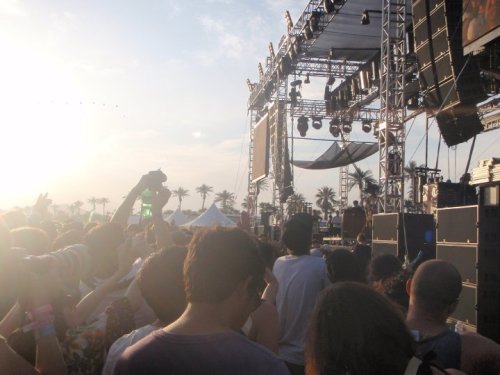 Jonsi#- A phenomenal, emotional live set from the sigur ros frontman left many non-icelandic people wondering how to pronounce his name.

Phoenix# – Really quite good, but tons of people around me!  And I have
to run to Pavement!

Pavement, plus a HUGE Stephen Malkmus.

Pavement# * – Pretty much the main reason I came to Coachella.  So
good, I wanted to slap someone.  This is exactly what I hoped for.  I
even sang along to Stereo, and I NEVER sing along to anything.

Thom Yorke (with Atoms For Peace) – Fantastic, of course.  Impossible
to get any close.  “Just Eraser tracks,” he said at the beginning,
but then BAM, Everything In It’s Right Place!  What a shock!
Seriously though, it was good.

The Big Pink#- I was really impressed with how hard these guys rock. It was worth taking a break from Thom Yorke to see the new 4ad signees look at home with the smoke machines and bright lights.

Gorillaz #* – Like a short film festival with an orchestra performing
the soundtrack live.  One could immediately see the HUGE budget.
Damon Albarn was right up front, too!  Hardly a virtual band at that
point.  But many great guests including De La Soul and Bobby Womack!
Kind of an abrupt ending with Cloud of Unknowing, but that’s probably
due to the fact that some guests like Mos Def were in trapped in
Europe because of the volcano.  Otherwise, amazing set and a great way
to end the festival.  But one more thing…

?# – I refuse to believe that the man onstage was Sly Stone.  I believe
they paid a homeless man to replace him once they discovered Sly died
at the hotel earlier.  Seriously, what the fuck was that?  Nothing
felt real.  Songs abruptly stopping halfway through, roadies panicking
onstage, “Sly” (looking more like a subpar George Clinton) not singing
while sitting in a swivel chair, faulty keyboards, general mumbling
and a random dude onstage taking photos.  Everyone (meaning a
considerably small crowd) had a look of concern on their faces.  And
this is after postponing the show earlier in the day and a good HOUR
of soundcheck.  Then he just disappears when he jumps offstage.  I
love Sly, but this was just ludicrous.  Either this was the worst
music performance ever or the best avant-garde performance ever.

So that concludes the epic journey that was Coachella.  Afterwards, we
decided to get the hell out of there right away (basically two and a
half hours after Gorillaz ended), leaving our friends Chloe, Trevor,
John, Lindsay and others in the dust.  Pip came along with us on the
way back, so what we thought was crowded before turned out to be a
vast plethora of space.  We turned onto the wrong route after we past
the Burbank area, so we made an unnecessary detour into Fresno.  And
believe me, it wasn’t all that worth it.

We got into San Francisco where my fantastic sister Anna offered us
her pad to rest and shower in.  Tim, Heather, Alex, Dave and Pip then
left me to die in San Fran while I had a massive panic attack and fell
into a coma.  Luckily some Spanish trainees came to the rescue, and my
sister reluctantly took care of me the rest of the time.  Then she
threw me into a cargo ship back to Vancouver once I woke up two days
later.

Okay, fine, that’s not true.  They were Mexican trannies.

But honestly, it was one hell of an amazing trip, even if there were
hellish times where I was BEYOND exhausted.  Thank you so much to Pip,
Heather, Dave, Alex, Tim and my sister Anna for providing great times
and memories I will always treasure (or possibly repress).

-Julian “Pure Bars Are Like Eating A Bucket Of Shit” Bowers

Relaxing times by the ferris wheel.

These photos were by Julian and Heather. There are more neat photos on this blog: http://yvanrodic.blogspot.com/2010/05/coachella-april-18th-2010.html including one of me, apparently! Thanks for the tip Alex! -Tim

3 responses to “And Don’t The Kids Just Loathe It… Coachella 2010 Review!”