Shiloh- Alright: Everything They Want You To Buy Is For Sale 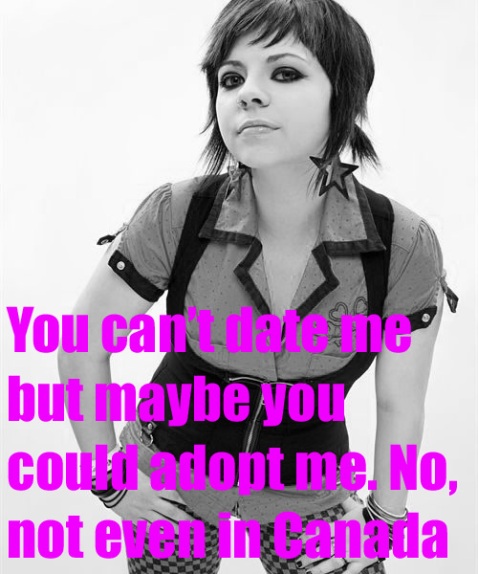 I have been aware of Shiloh’s existence for a while now. A 15 year old, Canadian pop singer birthed about 6 years too late from the slightly-less worn yet similarly modeled canal of the American Music Industry into an internet age that doesn’t seem to offer much in the way of long-term career options. Even less so for a bubblegum artist who is perhaps peaking before filling in her A-cups. Her (Canadian) hit singles were called “Goodbye, You Suck” and “Operator (A Girl Like Me)” and both videos revealed a slightly odd-looking, not-rail-thin, and pink-and-black-hair-dyed girl of a headache-inducing youngness who is apparently shilling the same product that Avril Lavinge was back when I was 14 and still a bit old to be buying it. Now, I know that I’m hardly the target audience of Shiloh’s record label, lawyers, managers and marketing team, but how is anyone supposed to understand the nowhereness that plagues her ever-confusing image?

Relocating from her birthplace of Abbotsford, BC, Shiloh started as a country musician in Alberta and Saskatchewan before meeting her hefty team of managers and heading back to Vancouver to strike it (Canadian) big-time with a glossy pop sound that shows nary a trace of her country background nor her punk-rock clothing combinations and piercings. Her heavily-processed voice possesses no character, save a slight nasal aftertaste and the music might as well be made by the same computers that keep Britney in a job between court cases. I don’t buy her look. I don’t get it. I mean here’s a girl who looks like she’s being marketed as a bratty, pop-punk princess. Okay I get that. But her music sounds like a prepubescent and somehow castrated version of P!nk if P!nk was Avril Lavinge and didn’t have Tim Armstrong or Chantal Kreviazuk (respectively) writing for her. It’s not even a bit alternative! It’s just straight-up bubblegum pop music. Now, there’s nothing wrong (in theory) with that, but why all this confusing mall-punkness? Is it her weird little face? Is she not classically pretty enough to be the next Christina? I don’t believe that nose rings and hair dye are really that cool right now. I don’t believe her over-the-top, feel-good videos with too-enthusiastic dancers and her silly sort of don’t care attitude.

Which begs the question, what exactly is Shiloh the alternative to? Because at first glance it appears to be the Britney’s and Christina’s of yesteryear, but even as a younger pre-dress-wearing Avril, she still sounds cleaner. Is she the alternative to Feist? To Beth Ditto? To thoughtful, intelligent singer-songwriters that would make actual good role-models to twelve year old girls?

Here is Shiloh’s newest video. Now 16, she has moved into the inadvisable genre of radio friendly white-girl pseudo-reggae that encourages you (again, probably not you nor I) to “Believe in yourself” and “Keep your convictions strong” just before the head-scratching proclamation “Life is but a melody”.

Strangely, I am quite amused by this song/video. I am even all-but convinced during the uplifting chorus, despite copious amounts of lyrical wince-factors. The “popular kids” in the video are punished in later life by becoming normal people, and the “alternative to something, poorly dressed sort of punk kids” somehow become cancer researchers and marine biologists and all sorts of hoopla. Around the end, my heart is truly warmed. They really look like they are having a good time. Shiloh even seems to have found a bit of soul, and for a second you get the feeling like she’s forgotten she’s on camera and all of the young actors around her that really want to be in movies, they really are her friends. And for a second they really just are a group of best friends having fun and goofing around so glad to be out of school for the day and to not have to deal with their teachers and parents and those popular kids that will one day be plumbers and soccer moms and just finally breathe because Summer is infinite and Love is still new and Life is but a melody.

One response to “Shiloh- Alright: Everything They Want You To Buy Is For Sale”