What’s Up vs. Sighborg: a review by Julian Bowers

A golden rule if you want your product to sell at a merch table: Think of your audience as magpies.  Forget about content, forget about how it sounds or what it even is; if it’s glimmers, it will be hunted down.  And what could shine brighter in the eyes of a flock of geeky record collectors than the brimming novelty of a metallic single?

Portland post-punk proggers What’s Up join forces with Korean keyboard kooks Sighborg for this first release on the Obstructive Vibe label, on a glorious, ACTUAL copper 7-inch.  The tracks have to be the best two track names ever to have been beside each other.  “Refinance My Loom” on the A-side, and “I Don’t Give A Fuck” on the B-side.  Seeing those names together, written in green on a clear acetate sheet in front of a copper 7-inch, gave off a Pavlovian command that said, “BUY ME.”  Of course, I was a good boy and respected my master’s orders.

I wasn’t sure whether I was going to play it or not, seeing how I had no idea how it would behave with my needle.  But I decided that I have a spare and the needle I have now is quite old, so I figured why not?  However, as soon as I came home, the single seemed to be nothing but trouble.

Problem number one: The record got stuck on the spindle of my turntable.  As soon as I put it on, I knew that the trifles were coming.  I tried to pull it off right away, but it would bend like crazy and I wasn’t sure if I was going to snap it in the process.  I figured, “Well, I might as well play it, seeing how this might be the last thing my turntable plays.”

Problem number two: It has the WORST sound quality imaginable.  It is one notch BELOW the Edison phonograph cylinders.  When the needle dropped, a horrible hiss grated my ears.  Then after five seconds, the hiss quieted and the music began, which sounded like insanely muffled 8-bit electronica where the bass is too loud.  I wasn’t even 100% sure if that’s what I was supposed to be hearing.  When the song ended, there was about a minute of silence after, even though on the vinyl it still looked like the song had another full minute to go.  The upside is that it surprisingly did no damage to my needle.

Problem number three: After the song was done, I had a panic and decided that I needed to get this bloody thing off as if life depended on it.  In doing so, I deeply cut the tip of my right middle finger into the edge of the single.  It hurt a fair bit, and continues to hurt, a full two days after!  I was worried that foreign objects and diseases would enter into my open wound, thus giving me a disease and eventually making me quite dead.  Thanks for nearly killing me, Obstructive Vibe.  Thanks.

Problem number four: No listings.  Well, it was obvious to see that the single had no label on it.  But there is absolutely no indication of which side you were playing.  I had no idea if I listened to the A-side or the B-side first.  Either way, the next side was pretty much the same as the first track.  Super lo-fi, energetic electronica that sounded like a Sega game from 1878.  Then the minute of silence.

Taking off the vinyl was much easier this time (probably due to the fact I didn’t put the single all the way down and let it rest at the top of the spindle instead).  Frustrated but relieved the ordeal was over with, I put it back in its sleeve.  Luckily (I thought at first), there was a download code at the back, so that means I could download a high-quality MP3 of the single.  Well, no.  I went to the site and sure enough, I entered the code and it said, “Not a valid code.”  Problem number five.  Swell.

Later on, I found “Refinance My Loom” and “I Don’t Give A Fuck” (Those names will never get old) on Sighborg’s MySpace page.  When I heard the tracks at first, while I was right in hearing that they were quirky electronica numbers, they sounded NOTHING like the tracks on the single.  Then I thought, “Oh, Christ, am I playing it at the wrong speed?”  I pulled it out again and tested it.  Sure enough, I was.  There was no information about what RPM speed it was supposed to be, but I was imagining it was going to be 45 RPM like any SANE person.  Problem six!  Ugh!  It’s weird that having it on 45 didn’t make it sound unnatural.  Having it at 33 just made it sound like a different song from the same band.

So the single (if you don’t mind quality that makes 78s sound like a SACD) should appeal to fans of Dan Deacon, 8 Bit Weapon and the like.  The single also seems to be mainly a Sighborg release,

seeing how the tracks (“Refinance My Loom” and “I Don’t Give A Fuck.”  Ha ha, gold!) appear on their MySpace, and not What’s Up’s.

The single has been a source of frustration for me, and I haven’t been able to enjoy the music on it, especially since the download code is useless.

But then again… It’s made of copper.

And you know what?  That’s just fucking awesome.

What’s Up vs. Sighborg: a review by Tim the mute

Copper single and digital single. Both unplayable, at the cost of $10. 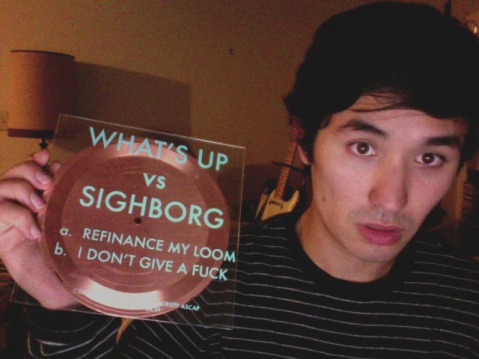